Response Magazine reported recently that free-standing insert (FSI) coupons emerged as a key component in promotional programs of many manufacturers and retailers during 2009 with more than 272 million pieces dropped. But what was the coupon redemption rate in 2009?

Well, it seems many cent-off coupons were put to use. The Experian Simmons National Consumer Survey showed that 7 out of 10 households used coupons in 2009. Although most were looking to save money, others used coupons to try new products. One out of two consumers claimed they used FSIs cent-off coupons, placing this coupon category at the top followed by coupons received by mail, found in packages, magazines, on the Internet or handed out in or near stores.

For many years, coupon redemption among Hispanic consumers has been reported to be lower than the general population due to a number of factors including cultural barriers, lack of familiarity with the redemption process, different product preferences, wrong distribution channels, requirement of multiple purchases, low coupon face value, and refusal to accept coupons by stores frequented by Hispanics, among others. 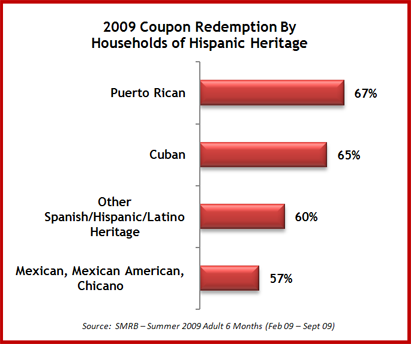 Given the diversity and expected growth of the Hispanic population in the US from 15% in 2009 to 30% in 2050, there is a big opportunity for manufacturers and retailers to introduce new products to Hispanics with the help of coupons. The key is to develop promotional programs – with a coupon component – that appeal to the diversity of the Hispanic market in the US. Sensitivity toward cultural differences based on country of origin, product preferences, regional variations of the Spanish language, and levels of acculturation, among other factors can send coupons to the trash can or get Hispanic consumers to try new products.

– Census Bureau – Projections of the Population by Sex, Race, and Hispanic Origin for the United States: 2010 to 2050

Thanks for this good article!