Pros and Cons of Adding Cell Phones to Telephone Samples

Summary: The increase of cell phone-only households has been forcing research based on phone surveys need to include cell phone samples to be representative. 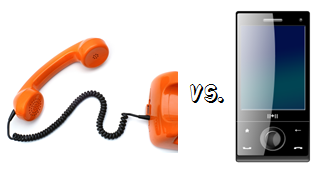 Should you include cell phones in your telephone samples?

The increase of cell phone-only households and the use of cell phones most of the time, even by those who still have landlines, is becoming a serious issue market researchers involved in survey research can’t overlook. Cell phone samples need to be included in the sampling plan.

Why can’t we ignore cell phones? It is a matter of coverage, as Scott Keeler, the Director of Survey Research at the Pew Research Center pointed out in a recent presentation to members of the Insights Association (former MRA). He called attention to the fact that at least 25% of adults can be reached only on a cell phone, a proportion that is even higher in certain groups such as young adults 25 – 29 (51%), 18 – 24 (40%) and Hispanics (34%).

This means that when we rely only on landline sample frames, certain population segments are likely to be underrepresented. Analysis of data from the Census and Pew Research Center surveys shows that only 7% of adults 18 -29 can be found in landline samples, while 66% are adults over 50.

Including cell phones in telephone samples is more complex than just calling landlines. Keeler pointed out a set of practical, legal, and ethical issues we face when dealing with cell phone samples.

To deal with these ethical issues, telephone surveys with cell phone samples need to be designed to carefully screen respondents and verify to whom we are talking, if it is the right time to call if it safe for the respondent to talk, and if the person is in position to talk about sensitive topics.

How Much Does it Cost?

Unfortunately, including cell phones in telephone samples doesn’t come cheap due to the inefficiencies brought by the above mentioned legal issues and the pricing structure of cell phone services in the US, where consumers pay not only for the calls they make but also for the ones they receive.

According to the American Association for Public Opinion Research (AAPOR)‘s Cell Phone Task Force, cell phone interviews are typically at least twice as expensive as landline interviews and can be three or four times more costly if cell phone-only samples are used.

To find guidance in how to meet the difficult and costly challenges of cell phone surveys check the 2010 AAPOR Cell Phone Task Force Report: New Considerations for Survey Researchers When Planning and conducting RDD Telephone Surveys in the U.S. With Respondents Reached via Cell Phone Numbers

What Are the Alternatives?

Finally, if your organization can only afford landline samples, luckily, according to Keeler: 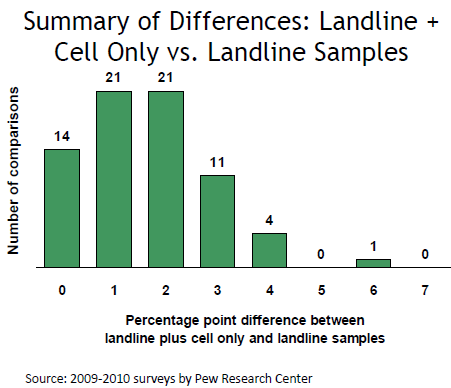 Although these are good news, they don’t provide a solution to the coverage issue, so if you are interested in reaching young groups that can’t be reached by landlines, and can’t afford a cell phone sample, you should consider a hybrid approach that combines telephone and online surveys or give ABS a try.